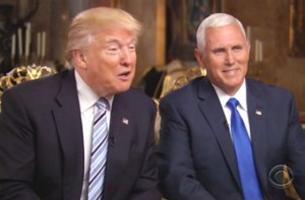 Seth Meyers took a moment to talk about the results of the 2016 presidential election and the prospect of a Donald Trump presidency at the beginning of 'Late Night'.

Meyers, one of Trump's biggest critics during the campaign, said: "We've been talking about Donald Trump on this show for 18 months, and one of the things I've tried to make clear over those 18 months is how I've been wrong about him at every turn."

Meyers said the good news was that "based on this pattern of me being wrong on every one of my Donald Trump predictions," Trump will probably be a great president.

But he promised he wouldn't stop criticizing Trump when it's called for.

"Donald Trump made a lot of promises as to what he's going to do in the next four years, and now we get to see if he can fulfill them," he said. "And so, I'd just like to make one promise to him: We here at 'Late Night' will be watching you."

Meanwhile, Stephen Colbert spent significantly more time on the topic and told people not to move to Canada just yet because being an American citizen is like family and you're in it whether you like it or not.

"I'm Stephen Colbert... I think? I'm not sure what to believe anymore," the CBS host said. "This is what it feels like when America is made great again. I was really hoping it would feel better because this suuucks."