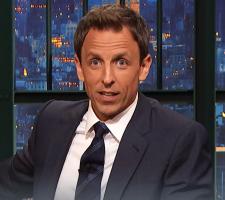 Meyers says of course Obama loves America because it would be even more stressful to serve as President if he didn't.

"Being president is like being a mother, a single mother, and you love your kid but at best they love you 48 percent of the time," he then quips.

Meyers also uses a clip from 'Swimfan' to send a message to Giuliani.

As for Obama's criticism of America, Meyers says: "You can believe the US is the greatest country on Earth and also believe it can be better," he concludes.

"That's why the National Anthem is 'The Star-Spangled Banner' and not 'Everything is Awesome.'"