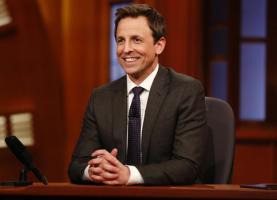 In a special Thanksgiving interview with his family, Seth Meyers asks his father to explain why he turned the family into Pittsburgh Steelers fans even thought they lived in New Hampshire.

Mr. Meyers jokes that it was because "you were going to live in my house and the notion that I would have a couple of Patriots fans in my house was unacceptable."

"And I had to feed you... and I felt that if I would go to that expense I should get something for it."

Meyers' mother also shares why she hates the running game, no matter who has the ball.