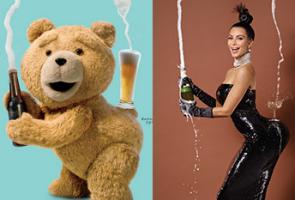 The foul-mouthed teddy who is back for a sequel later this month, strikes the same pose that Kardashian covered for Paper last winter to "break the internet."

Of course, he opted to go with a bottle of beer rather than champagne.

MacFarlane says inside that "we wanted to make sure this story was completely new."

"The trap that you fall into with a comedy sequel is that you're making the same movie two times."