Seth MacFarlane: Donald Trump Has Thinner Skin Now Than When He Was Roasted 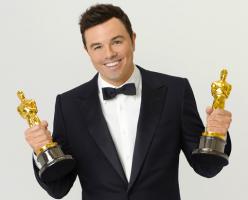 "The weird thing, James, is that he shockingly took his lumps like a champ that night and I remember he would nod and go 'Alright, that was fair enough' and it was -- which now is a little... not the same."

"That's the big difference that I notice. This was a guy... I mean we tossed hard ones at him and he just took it."

"And I think no matter who you are, any one of us, if you stand in front of crowds that are lionizing you for 18 months, it'll turn anyone into a mad man."

"It's not normal and I think you've seen it not just in him but in other candidates that's been the case with as well."

"But that's the difference that I noticed. The skin has gotten a little thinner."

"Also, he didn't have Twitter than," adds James Corden. "In 2011, he wasn't tweeting so much so maybe he would have been tweeting that night as the roast went out going Seth MacFarlane, terrible, sad, awful."

"I would have had to block him," says MacFarlane. "He owns the worst thesaurus in the world."

MacFarlane also goes on to talk about running into celebrities after taking shots at them on 'Family Guy'.