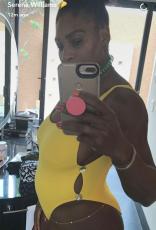 ) is pregnant with her first child.

The 35-year-old tennis star shared a photo showcasing her baby bump in a yellow one-piece swimsuit with the caption "20 weeks" on Wednesday but later deleted the photo.

However, Williams publicist has now confirmed the 23-time Grand Slam champion is pregnant.

She has been engaged to Reddit co-founder Alexis Ohanian, 33, since December.

The two have recently been vacationing in Mexico.

If Williams has been pregnant for 20 weeks, that would mean she was pregnant when she beat sister Venus Williams to win the Women's Singles at the 2017 Australian Open.

Serena Williams is expected to go on maternity leave and take time off from tennis until 2018.