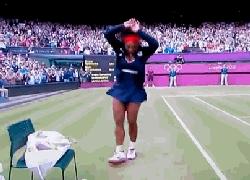 ) to win the singles gold medal at the London Olympics, due to the its association with gang members in her hometown of Compton, California.

Williams' five second interpretation of the "crip walk" was an impromptu reaction to her victory, which has placed her alongside another tennis star of the past, Steffi Graf, as only the second woman ever to have won the Golden Slam, by winning all for Grand Slam titles, plus an Olympics Gold medal.

The criticism began after Jason Whitlock of Fox Sports said: "What Serena did was akin to cracking a tasteless, X-rated joke inside a church. Serena deserved to be called out. What she did was immature and classless."

"There was Serena," he went on to add, "the tennis legend, the winner of 14 individual Grand Slams, the best player of her generation, the American girl being crowned at the All-England Club as the queen of tennis- Crip-Walking all over the most lily-white place in the world."

"She didn't do it on purpose. It was a moment of unbridled joy. She pumped her fist, jumped up and down, looked into the crowd, then did her ill-timed dance. You couldn't help but shake your head. It was as if Serena just couldn't seem to avoid dipping into waters of controversy even as she'd ascended to the top of her sport."

During the post-match news conference, Serena Williams didn't want to talk about the dance: "Actually, there is a name. But I don't know if it's inappropriate. It's just a dance we do in California."

But now that she's had a day to think about it, Williams says she doesn't care as long as she has her Gold medal.

"I don't care. That's the least of my worries," she said in her first interview since the incident. "I'm so excited I was able to do the dance. I'm glad I did it!"

"It's getting so much attention. It just happened. I was so excited that it just came out," she laughed. "I guess I'm good at it!"