Serena Williams: It Wasn't Fair For Fans To Blame Drake For My US Open Loss 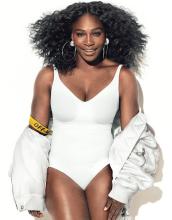 ) doesn't want fans blaming her boyfriends for her losses on the tennis court.

But that's exactly what happened when Williams lost in the US Open Semifinals against Roberta Vinci last year. Williams was defeated in three sets to the relative unknown.

Fans attacked her then boyfriend, Drake, and blamed the singer for distracting her from the title.

"I don't think that was fair," the 34-year-old Williams finally says in Glamour.

"I'm the one who's playing, who's making mistakes or making winners. I'm not one to blame anyone else for anything."

"And I don't think anyone else should either. I played a really good opponent that day. And I wasn't at my best."

The star also doesn't believe she's anywhere close to being done even though she's in her mid thirties.

"Who says that your thirties is when you're supposed to be done? I would like to know who made that rule!"

"I was talking to my mom one time, like, 'Gosh, I'm 30.' And she's like, 'In your thirties you're even stronger than in your twenties.' I didn't believe her, but I have played better in my thirties. My consistency is better, my momentum is better, my wins are quicker."