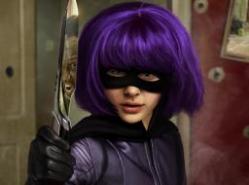 A couple of weeks after the release of the first trailer for 'Kick-Ass 2', we've got an international trailer focusing largely on Chloe Moretz (photos

The trailer features Moretz as the 15-year-old who gets through a gym-class dance by pretending she's fighting ninjas.

She then joins the new wave of self-made masked crusaders, led by Aaron Taylor-Johnson's Kick-Ass, Colonel Stars and Stripes (Jim Carrey) and a host of others.

The character was Moretz's breakout role with her stealing every scene she was in for the 2010 film.