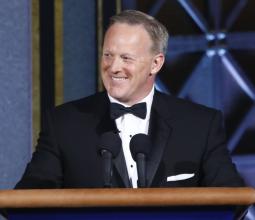 While it would've been easy to predict Stephen Colbert would talk politics and President Donald Trump during his opening monologue at the Primetime Emmy Awards on Sunday night, no one saw a Sean Spicer cameo coming.

The former White House press secretary made an appearance at the end of Colbert's opening monologue in a bit that mocked his own defense of Trump's inauguration crowd.

"This will be the largest audience to witness the Emmys, period -- both in person and around the world," Spicer said from a podium.

Spicer's appearance drew reactions of shock from the celebrity audience as Colbert sniped: "Wow, that really soothes my fragile ego. I can understand why you want one of these guys around."

"Melissa McCarthy everybody. Give it up," Colbert joked as Spicer laughed before the camera panned to McCarthy, who famously impersonated Spicer on 'Saturday Night Live'.