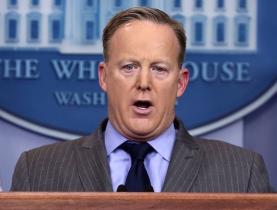 White House Press Secretary Sean Spicer hangs himself with a note that says "I quit" in 'The Simpsons' take on President Donald Trump's first 100 days.

Kellyanne Conway refuses to take over the job while Steve Bannon and Jared Kushner battle it out as Trump reviews his accomplishments in bed.

"One hundred days in office, so many accomplishments — lowered my golf handicap, my Twitter following increased by 700 and finally we can shoot hibernating bears. My boys will love that," says Trump.

When an aide brings Trump a thick copy of a new bill proposal, the President responds: "Can't Fox News read it, and I'll watch what they say?"

The minute long bit also finds Marge Simpson already out of the medication that was supposed to last her through Trump's first term as the announcer reminds viewers they're just 6.8% of the way through.