Sean Penn Not Worried About Investigation Over El Chapo: 'Nothing To Hide' 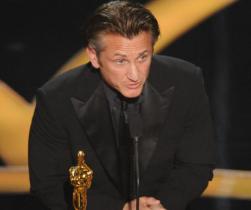 Sean Penn says he's not too worried about an investigation over his secret meeting with El Chapo now that the Mexican drug kingpin has been caught.

Mexican authorities revealed after El Chapo's capture that it was the leader's aspirations for a biopic and his meetings with producers that pinpointed them to his location.

A Mexican law enforcement official has told NBC that Penn and actress Kate del Castillo's phone conversations with El Chapo were intercepted and that allowed investigators to learn new details about his location.

"I've got nothin' to hide," Penn tells the BBC.

The Oscar winning actor said he already had believed his movements were being tracked.

"There is no question in my mind but that the DEA and the Mexican government are tracking our movements," he wrote in his original Rolling Stone article.

He said while he couldn't "see no spying eyes," during his remote trek, he knew to "assume they are there."

Guzman was captured three months after their meeting.