Sean Penn On Why El Chapo Agreed To Interview: 'I Can't Read His Mind' 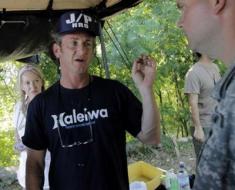 In a sit-down interview with '60 Minutes', Sean Penn talked about his interview with Joaquín 'El Chapo' Guzman before the Mexican drug lord was captured.

Penn said that to him the interview was a "failure" because he felt it didn't bring attention to the real problem: the War on Drugs.

"I think that there's a tendency to over-demonize any human being is not in our best self interest," he said. "Like it or not, we're married to 'em. They're of our time. They're affecting us. So like a marriage, you know, you might want a divorce."

"If all we aim to understand is that this is a very bad person, then let's not understand anything else."

"I can't read his mind," he said when asked by Charlie Rose why the kingpin agreed to do an interview while in hiding.

"I would say that, you know, from the conversation that was had, he, in several ways, wanted to be on the record."

Penn said he was "stunned" that he was invited for an interview.

"I was asked did I think he'd let himself be taken alive. My impression was that he would not. I was shocked," he said. "I didn't expect him to be captured this quickly. But I did expect that one day I'd hear about a big shootout."

Mexican authorities have said that El Chapo's interest in a biopic and meeting with Sean Penn helped them track him down.