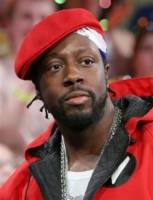 Days after Wyclef Jean confirmed his plans to run for Haiti's presidency, Sean Penn stopped just short of saying the musician was taking advantage of the situation.

"I'm not accusing Wyclef Jean of being opportunistic," said Penn. "But I think it's extremely important that we pay great attention to both the individuals in the United States who are enamored with him and those that may themselves be opportunists on the back of the Haitian people."

"Right now, I worry that this is a campaign that is more about a vision of flying around the world talking to people as he said... I would be quite sure that this was an influence of corporations here in the United States and private individuals that may have capitalized on his will."

"What I'm encouraging is that we look very hard at all the donors because this is somebody who is going to receive an enormous amount of his support if he continues his campaign from the United States," he clarified.

"I'm very suspicious of it, simply because he as ambassador at large has been virtually silent. For those of us in Haiti, he's been a non-presence," he said bluntly.

"His voice has really been most loudly that which he allegedly had taken over $400,000 of money that was designated for Haitian relief for himself. That's going to have to be looked into."

"I want to see someone who's really, really willing to sacrifice for their country and not just someone who I personally saw with a vulgar entourage of vehicles that demonstrated a wealth in Haiti that in context I felt a very obscene demonstration."

Former Fugees bandmate Pras (Prakazrel Samuel Michel) is also suspicious of Jean's presidential ambitions and said he would support opponent Michael Martell simply "because he is the most competent."

"I think he brought Haiti a lot of national spotlight and attention where people are concerned and really want to help out but to be the President of Haiti, I don't see it because I don't see what his real plans are. His plans are so general."

"If he really wanted to help Haiti, he should have chosen his influence and champion and go around these countries that have pledged money to Haiti who have not given a single dime yet."

"I just think he's exhausting his energy in the wrong places."