Seal Accuses Heidi Klum Of 'Fornicating With The Help' 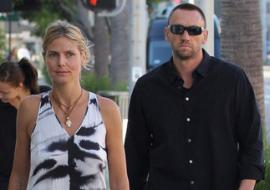 ) vacationing with her bodyguard of four years, Martin Kristen, surfaced.

"Whilst I didn't expect anything better from him, I would have preferred Heidi show a little bit more class and at least wait until we separated first before deciding to fornicate with the help, as it were," the singer says in an interview.

"But I guess you now all have the answer that you've been looking for the past seven months."

But the singer's representative says he "was not implying his wife was cheating while they were together, but he was merely pointing out that their separation and divorce were not final and they are still legally married."

Klum, who has reportedly become "very close" with her bodyguard, says it's "sad that Seal has to resort to this kind of behavior."