Scarlett Johansson Doesn't Think Monogamy Is 'Natural': 'It's A Lot of Work' 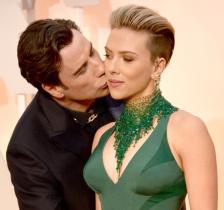 ) says she doesn't think it's "natural" to be monogamous.

The 32-year-old actress, who ended her second marriage last summer, shares her opinions on marriage in an interview in Playboy magazine.

"I think the idea of marriage is very romantic; it's a beautiful idea, and the practice of it can be a very beautiful thing," she says. "I don’t think it's natural to be a monogamous person. I might be skewered for that, but I think it's work. It's a lot of work."

"And the fact that it is such work for so many people — for everyone — the fact of that proves that it is not a natural thing. It's something I have a lot of respect for and have participated in, but I think it definitely goes against some instinct to look beyond."

"Being married is different than not being married," Johansson says, and anybody who tells you that it's the same is lying. It changes things."

"I have friends who were together for 10 years and then decided to get married, and I'll ask them on their wedding day or right after if it's different, and it always is. It is. It's a beautiful responsibility, but it's a responsibility."

Johansson, who split from Roman Dauriac, was previously married to Ryan Reynolds. Interestingly, although she called it devastating, she made similar comments after that split.