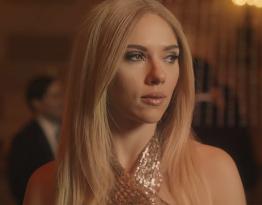 Johansson took on the 35-year-old and her father, President Donald Trump.

"She doesn't crave the spotlight. But we see her. Oh, how we see her."

"A feminist. A champion. An advocate for women. Like... how? When she watches Titanic she thinks she's Rose — sorry, girl, you're Billy Zane."

The fake ad ends with: "Complicit, the fragrance for the woman who could stop all this — but won't."