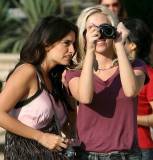 The film also stars Patricia Clarkson, Rebecca Hall, Kevin Dunn and Chris Messina has completed filming and will likely be released in fall of this year. It sounds like Woody will be living up to his name in this one.