Sarah Silverman On Engagement Rumors: 'I Will Never Get Married' 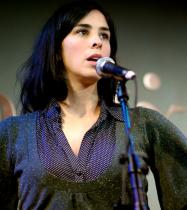 ) isn't just denying rumors of an engagement to Michael Sheen, the comedian is making it clear she never plans to get married.

This after Star magazine, in a story titled "Sarah Wants A Ring," recently claimed that Silverman had been dropping hints to Sheen that she wanted him to propose.

"Just read that I wanna get married which is hilarious because I will never get married," the recurring 'Masters of Sex' guest star said on Twitter.

"Why would I want the govt involved in my love life? Ew. It's barbaric."

"That s--t never bothers me because who cares but I feel like this one is bigoted. The Jew girl MUST want a RING! Yich."

This isn't the first time Silverman has described marriage in this manner.

In 2010, the comedian said: "I'm not against marriage, but it's just not for me. I'm a vegetarian, but I don't have a problem if you want a hamburger. Marriage, to me, is like eating meat. I think it's gross and f--king crazy. It's this superbarbaric, old-timey tradition that no one remembers we don't have to do anymore."