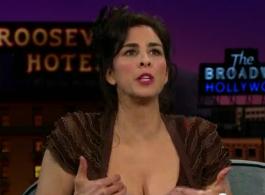 ) criticized Donald Trump in an appearance with Conan O'Brien.

"I think most people would agree Donald Trump might be the most divisive presidential candidate ever," introduced Conan. "Even as he continues to win primaries, many are openly comparing Donald Trump to Adolf Hitler."

"Hitler, thank you so much for stopping by tonight—and might I add, you're the worst."

"So, my understanding is you want to clear the air, because you think you're being unfavorably compared to Donald Trump," Conan said.

"What kind of person talks about his penis size on national television? Oh, yeah! I'm so sure Donald Trump has a big penis. I famously have a micropenis—that's what makes a tyrant."

"Anyway, all these comparisons to Trump, it bums me out. You know what I mean? Sometimes I watch him and I'm like, 'Is that how people see me?,'" she said. "I have to be honest: Trump, he's starting to make me rethink some of the things I've done."