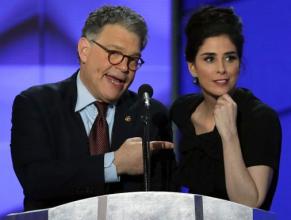 "I support Bernie Sanders and the movement behind him," Silverman began. "Not only did Bernie wake us up, he made us understand what is possible and what we deserve."

"But to the 'Bernie or Bust' people, you’re being ridiculous," she said.

Silverman, who was a Sanders supporter herself and endorsed him, said she would now vote for Hillary Clinton "with gusto."

She added she was "inspired and moved to action by the ideals set forth by Bernie, who will never stop fighting for us."

Silverman ended her speech saying Clinton was "the only person ever to be overqualified for a job as the president."

) also spoke at the event and trashed Republican presidential nominee Donald Trump for his statements about Mexican immigrants.

"My family never crossed a border. The border crossed us," she said: "When Donald Trump calls us criminals and rapists, he is insulting American families. My father is not a criminal or rapist. In fact, he's a United States veteran."

Longoria is ninth-generation American from a place once owned by Mexico in south Texas.