Sarah Paulson: Watching Myself In 'People v OJ' 'Literally Made Me Ill' 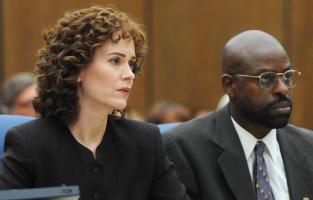 Sarah Paulson is nominated for an Emmy for her role as Marcia Clark in 'The People v. O.J. Simpson', but the actress says she hasn't been able to bring herself to watch the series.

"I haven't seen any of it and I just saw a little bit of that verdict," Paulson said during the show's TCA panel on Tuesday.

"I felt very, very connected to Marcia Clark and to watch her lose it is somehow separate enough for me – and yet I feel inside of it."

"I didn't really think of her as a human being. I was just trying to honor what was on the page," she explained. "Of course it changed the way I thought about her."

"I feel like it changed me molecularly in a way. Who I was when I came into this and who I became when it was over has changed."