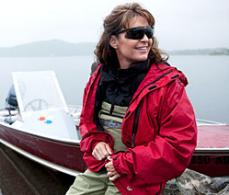 Sarah Palin will host an outdoors show on the Sportsman Channel in 2014 titled 'Amazing America With Sarah Palin'.

The announcement was made Monday by the network, who called her the "First Lady of the Outdoors."

According to the statement, the program will be made up of an "anthology of stories that explore some of the most original, interesting -- and sometimes inspiring -- people, places and pastimes connected to America's outdoors lifestyle."

Palin, who previously did 'Sarah Palin's Alaska' on TLC, say she's "excited to help shine a light on all the great American sportsmen and women in the country who live the outdoors lifestyle."

"Sportsman Channel is the leader in their industry and I am thrilled to be partnering with them on this show."

The program currently aiming for an air date of April 2014.