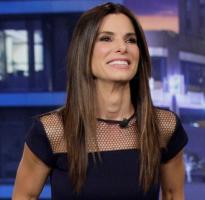 ) teared up as she thanked Jay Leno for always being "so kind" to her -- even when her films were less than stellar.

"When I saw you in Wrestling Ernest Hemingway, I looked at you when I looked at my wife for the first time," praised Leno of Bullock's role before she broke out in 1994's 'Speed'. "You just popped. And I said 'Oh my god, this person's going to be a big star.' And it all came true."

"Well, I'd like to say something," replied Bullock. "I'm going to start crying but you've always been so kind. That's saying a lot in this business, because we like to be mean."

"There's not been one time you haven't treated me like I had something to offer – even when the film was awful and you knew it, you never let me see it in your eyes."

"When I made crazy life decisions, you never questioned it. You were so welcoming. I just felt special, even when I was insecure. And I think everyone in this country has felt that everyday you've been there in their home"

"Well, you are special," Leno said as he kissed Bullock's hand.