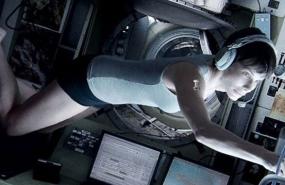 ) says accepting the starring role in director Alfonso Cuaron's 'Gravity' was "the best life decision I think I ever made."

"What I got out of it personally outweighed everything else," Bullock tells AP in an interview. "I'm glad I got to meet the human being - Alfonso - that led me to say, 'OK, let me investigate if I can even do this.'"

Bullock, who had taken a break from films after 'The Blind Side' and her subsequent divorce, says what helped her was Cuaron's promise that making the film wouldn't keep her away from her son, Louis.

She says she told Cuaron: "'It has to be a great time for my son. I can't miss him. If I miss him, I will be of no use to you. You know, he's just learning how to walk. So guess what's going to happen? I have to go! He's taking steps!'"

When Producers asked "if we make it amazing for him right where you are, will you be OK?," she couldn't help say yes.

"I was like, I will be here 100 percent as long as I know that little dude is perfectly content," she explains.

Bullock is already receiving rave reviews for her performance in the film after it screened at the Venice and Toronto film festivals. The actress shot much of her scenes alone in a darkened room to convey the loneliness of space.

"You're frustrated because you can't accomplish something. There's no control," she says. "I was always out of my element. I learned so much on a daily basis. And I just went wow, isn't that funny how being miserable every day physically and then emotionally because of work then turns - makes you open to whatever is coming your way."