Samuel L. Jackson Responds To Trump's Claim That He Doesn't Know Him 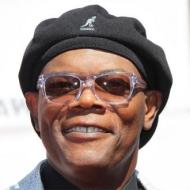 Samuel L. Jackson responds to Donald Trump's claim that he doesn't know the actor and finds him "boring."

Jackson says he's been golfing with Trump several times and one person can even back him up on it -- former President Bill Clinton.

He also lets it be known that Donald Trump refers to himself as "The Don."

Samuel L. Jackson also talked about how he was cast and discovered who he was playing on the original 'Star Wars'.