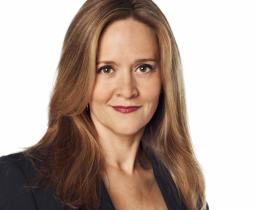 Samantha Bee is leaving 'The Daily Show' to produce and host her own TBS series.

Bee will bring the same satirical point of view she has been for years on the Comedy Central series to the as yet untitled project, which she is producing with husband Jason Jones.

She will continue doing features of the 'Daily Show' for some time but the TBS series undoubtedly means she will not be among the names being considered to take over for longtime host Jon Stewart.

While TBS has confirmed the project and complimented Bee on "her straight-faced sarcasm and ruthless wit" and "her uncanny ability to mine comedy gold from just about any awkward situation," the network has not announced a timeslot.

It's is thought that Bee may be inserted into TBS' late night lineup.