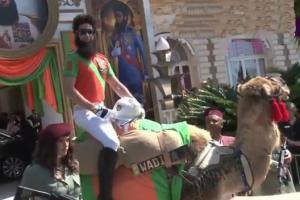 Sacha Baron Cohen's 'The Dictator' arrived with two model bodyguards and a camel for his debut at the Cannes Film Festival.

Dressed in a red shirt with green sleeves and white pants, Baron Cohen climbed on top of the camel for photographs but almost fell off as it made a sudden movement at one point.

The camel was also decorated in the colors of the fictional North African Republic of Wadiya and carried a license plate that read "Wadiya 1."

Baron Cohen, as the freedom-hating Admiral General Aladeen, was followed by dozens of photographers and bemused locals as he strolled along the streets.