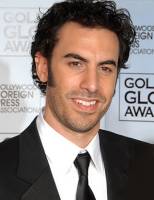 Sacha Baron Cohen shocked the audience at the Britannia Awards on Sunday night after turning a tender moment, at least for a few seconds, into one of horror.

) on stage accompanied by an elderly woman in a wheelchair, who was introduced as 87-year-old Grace Collington, the "oldest surviving actor to have worked with Charlie Chaplin in a silent movie,"

Proclaiming Baron Cohen as one of the best comedians of the day, Hayak called him on stage.

Cohen met the woman and, after graciously accepting a cane from her, proceeded to re-create the signature penguin waddle.

However, the comedian quickly tripped, slammed into the wheelchair and sent the woman face-first off the stage.

The audience gasped then witnessed a "dead" Collington was carried away by security.

"Grace Collington is the oldest — sorry, was the oldest... I dedicate my award to her," Baron Cohen deadpanned. "It's obviously a tragedy , but on the bright side what a great way to go. She'll probably make the Oscars In Memoriam section. Anyway, tonight is not about her. It's about me."

The Britannia Awards were established in 1989 but this is only the second year they've been broadcast on BBC America. The network is no doubt hoping the skit will raise awareness about the awards show.