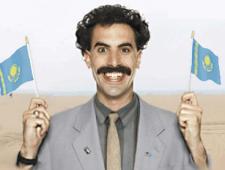 Sacha Baron Cohen has played his share of outlandish characters from Ali G to Borat, Bruno and General Aladeen.

However, the actor says that one of them came under the microscope from none under than the FBI while he was filming his 2006 comedy, 'Borat'.

"The FBI got so many complaints there was a terrorist traveling in an ice cream van," the 44-year-old laughs.

"They got so many complaints that they started compiling a little file on us and eventually they came to visit us at the hotel."

"I obviously went missing when I heard because the crew were like, 'FBI's downstairs. Sacha, disappear.'"

Cohen says it wasn't surprising since he was travelling in conservative parts of the country as a strange Kazakh.

When it was time for his next film, Bruno, Cohen says he decided to hire security while in Kansas.

"We hire a guy and his job is, he's a bit like Nobby," he says, referring to the character in his new movie 'The Brothers Grimsby'. "His job is to prevent me from being arrested."