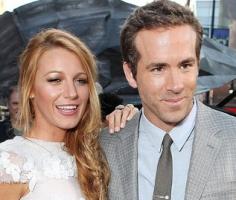 Ryan Reynolds wasn't shy about thanking his wife after winning Best Comedic Performance for Deadpool at the 2016 MTV Movie Award.

"I'm really glad Amy Schumer didn't win, that would be really weird with those dances," Reynolds told the audience. "I have been trying to get Deadpool made for over a decade and I failed and it's you the fans that got this made."

"The reason I'm standing up here is because of you guys, and we had blast working on this movie, but it wasn't all unicorns and cocaine!"

"I'd like to thank Twentieth Century Fox, the Deadpool team, the entire crew up in Vancouver," he added. "I want to thank my wife—everything I do is to make her laugh, especially the sex. Thank you."

Lively has been married to Reynolds since 2012. They recently welcomed their daughter, James.

"They had me fighting another man in a burning building nude as though it were ripped from the pages of my childhood," he laughed.