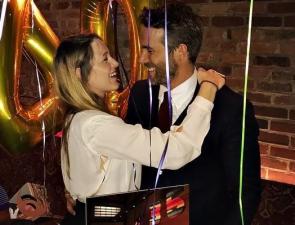 ) for keeping him "sane" before the release of 'Deadpool'.

"By the time we were in post, we'd been to Comic-Con, and people went crazy for it. The expectations were eating me alive," Reynolds tells Variety magazine.

"Blake helped me through that. I’m lucky to have her around just to keep me sane."

"I have three older brothers. Our father was tough. He wasn't easy on anyone. And he wasn't easy on himself. I think the anxiety might have started there, trying to find ways to control others by trying to control myself. At the time, I never recognized that. I was just a twitchy kid."

As for the role that was his first hit in years, the Canadian-born star says: "I would love to play Deadpool for as long as they would let me play Deadpool. We have outlines and stories for a number of different films."

He also wants to see a Deadpool-Wolverine crossover movie with the Hugh Jackman, even though the Australian actor has said 'Logan' would be his last film as the character.

"I have no idea if I can change his mind," he says. "It's the audience: I would exclusively exploit that relationship to get Hugh back for another one."

"Part of the reason I want to do a Deapool-Wolverine movie is not just because I think the two would light the screen on fire, but I genuinely love the guy."