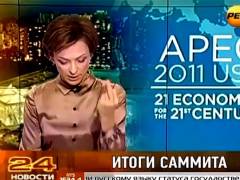 A Russian news anchor has become the subject of headlines in the country after seemingly giving President Barack Obama the finger during a live broadcast.

The incident at REN TV channel happened during the afternoon news broadcast with Tatyana Limanova.

Tatyana, who is a well known broadcaster at the network, made the insulting gesture while reading a news story about the rotating chairmanship of the Asia Pacific Cooperation organization.

She raised her hands and stuck out her middle finger as she informed viewers that this was a position previously held by Barack Obama.

The station has refused to issue an official comment.

However, the UK's Telegraph says off the record station employees are saying that Tatyana didn't know the camera was focused on her and she was trying to get back at technicians who had been trying to throw her off.

See video of the segment below: