Russell Wilson Says Ciara Way Out Of His League During Speech 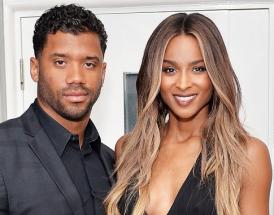 ) in a big way during a commencement speech at the University of Wisconsin.

The Seattle Seahawks quarterback told the graduates that it was important to know yourself and jump on the right opportunities.

"But no matter how badly I want to be a pop star, it would not matter how much self-confidence I had or have or how many hours I spend at the studio. Trust me on this. I cannot sing. So the question I asked when life told me no was: What am I capable of?"

"Once you know the answer, don’t be afraid to let everyone else know it too," he said.

Wilson said the same advice applied in his love life too.

"If you're dating a woman that's way out of your league, ask her to marry you," he said.

The 27-year-old proposed to the 30-year-old Ciara with a large diamond ring in March.