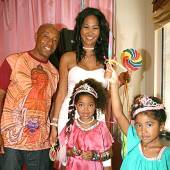 Don't think Russell Simmons is upset that he will be paying $40,000 per month in child support, as per a custody agreement reached last week.

"I am reading these stories today about how a judge ordered me to pay Kimora $40,000 a month in child support and I want to make something very clear," says music mogul Simmons on his website.

"Nothing was ordered, it was given. My kids have a fabulous life; they are exposed to a broad range of artistic and scholastic educational programs and I'm very happy to contribute to that. As long as I have it, they can have it. If I ever don't have it, I'm coming to live with them!"

The agreement states that Kimora will receive child support payments until his two daughters turn 19 1/2. But it also includes a rather unusual clause that will make sure the girls get a new car worth at least $60,000 every three years.

Kimora has sole legal and physical custody of the children, with monitored visitation for Russell, who will be allowed custody for one week every two months.