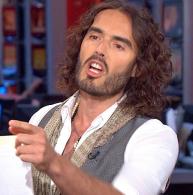 Russell Brand has written a column in British newspaper 'The Guardian' to explain why he took the 'Morning Joe' crew to task in an appearance two weeks ago.

"I was surprised by the soundman's impatient intrusiveness and yet more surprised as I stood just off set, beside the faux-newsroom near the pseudo-researchers who appear on camera as pulsating set dressing, when the soundman yapped me to heel with the curt entitlement of Idi Amin's PA," recalls the comedian.

"Often when you encounter rudeness from the crew, it is an indication that the show is not running smoothly, perhaps that day, or maybe in general," he says.

"When I landed in my chair, on camera, and was introduced to the show's hosts—a typical trident of blonde, brunette and affable chump—it became clear that, in spite of the show's stated left-leaning inclination, the frequency they were actually broadcasting was the shrill, white noise of dumb current affairs."

The "blonde, brunette and affable chump" was co-host Mika Brzezinski and panelists Brian Shactman and Katty Kay, of course.

"One of the things that's surprising when you go on telly a lot is that often the on-camera 'talent' (yuck!) are perfectly amiable when you chat to them normally, but when the red light goes on, they immediately transform into shark-eyed Stepford berks talking in a cadence you encounter nowhere else but TV-land -- a meter that implies simultaneously carefree whimsy and stifled hysteria," Brand adds.

"Why is our culture behaving like this? How has this become normal?," Brand asks. "It is by no means an exclusively American phenomenon, though wherever you encounter it, there is something American about it."