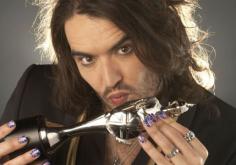 Russell Brand has signed a deal with FX for six half-hour episodes of on unscripted late-night series.

The comedian will helm the as yet untitled series that will feature his opinions on current events, politics and pop culture.

It will be shot in front of a live studio audience with an emphasis on crowd participation and is expected to debut next spring.

"We look forward to supporting Russell and his partner Troy Miller's ambition to strip down the hosted comedy format to its most fundamental elements and to create something daring and unfiltered for the FX audience."

If the brief test run is successful in the ratings, FX plans to order more episodes and make it a part of its lineup.

"I am so excited I'm on the point of climax, in fact I will put the 'O' into FX, which spells Fox, which is actually the channel's real name," Brand jokes. "That's the only thing that worries me about all this to be honest. At least I'll be able to have a Christmas drink with Bill O'Reilly."