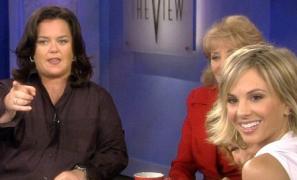 The meeting came days after Trump revisited their decade-long feud and admitted: "I said very tough things to her. And I think everybody would agree that she deserves it, and nobody feels sorry for her."

"Ivanka Trump, in a city of 8 million – we meet face 2 face," O'Donnell addressed Trump on Twitter.

"I thank u 4 listening – mother 2 mother – on this new years week – my best 2 us," referencing the Jewish holiday.

Ivanka didn't respond to O'Donnell on Twitter, which prompted another post or two from the former 'View' host.

She called Trump an "orange anus" and proclaimed "He will never be president."