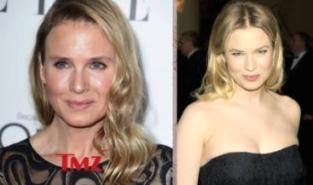 Rose McGowan is calling out a film critic for writing that Renee Zellweger no longer looks like herself because of her plastic surgeries.

Upon seeing the trailer for 'Bridget Jones's Baby', Variety film critic Owen Gleiberman asked: "If she no longer looks like herself, has she become a different actress?"

"You go to see a movie that features an actress or actor — in most cases it's an actress — you know well, and somehow she looks…different. Her nose is thinner, or her lips are fuller, or her lips are thinner and her cheeks are bolder, or her forehead is younger, or maybe you can't even quite put your finger on what the difference is, but you know it's there," he writes.

Without doesn't directly say Zellweger had work done, but insists it's almost obvious she did.

"Renee Zellweger, it may look to a great many people like something more than an elaborate makeup job has taken place, but we can’t say for sure. What we can say is that if that happened, it reflects something indescribably sad about our culture."

"The most toxic thing about 'having work done' is the feeling it can create that someone doesn't look dramatically different from the way they looked before so much as they look…less. Less vivid, less distinctive, less there. You can't prove it, but you know it when you see it."

Gleiberman concludes: "I hope it turns out to be a movie about a gloriously ordinary person rather than someone who looks like she no longer wants to be who she is."

But McGowan is coming to Zellweger's defense and lashing out at the critic for being "an active endorser of what is tantamount to harassment and abuse of actresses and women."

"Renee Zellweger is a human being, with feelings, with a life, with love and with triumphs and struggles, just like the rest of us. How dare you use her as a punching bag in your mistaken attempt to make a mark at your new job. How dare you bully a woman who has done nothing but try to entertain people like you," she writes in an op-ed piece in THR.

"Her crime, according to you, is growing older in a way you don’t approve of. Who are you to approve of anything? What you are doing is vile, damaging, stupid and cruel."

"You are simply a bully on semiglossy paper," she tells him.