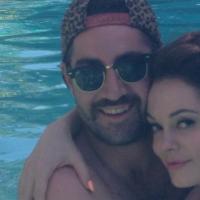 Rose McGowan has filed for divorce from her husband of two years, Davey Detail.

The 42-year-old former 'Charmed' star cited "irreconcilable differences" in the filing that also asks the judge to reject any claim for spousal support.

The couple married at Paramour Mansion in Los Angeles in October 2013.

This was her first marriage although she had been previously engaged to Marilyn Manson and director Robert Rodriguez.