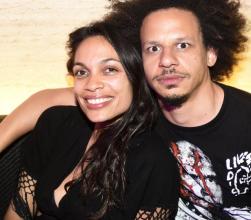 ) promises she's dating Eric Andre because apparently no one believes them.

"I'm guessing Eric Andre is the one who should feel insulted here," quips Stephen Colbert.

Dawson says Andre did take it a bit personally and wanted to post pictures of their tongues touching to prove it.

The couple met at the Democratic National Convention and Dawson says the comedian has got her into meditation, eating healthy and even took care of her in a diaper when she had to undergo and emergency procedure.