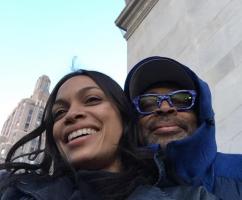 ) was arrested in Washington DC during a Democracy Spring rally on Friday.

The 'Daredevil' actress was staging a sit-in with around 100 others at the US Capitol to protest the role of big money in politics and voter identification laws.

She was arrested and issued a $50 citation for crowding and obstructing after crossing police lines.

The 36-year-old held up a sign that read: "Overturn citizens united."

She said she and the other protesters were "putting ourselves on the line for what a lot of people across America and I think across the planet really want to be able to see happen in America, which is one person, one vote and to really take the money out of politics so that we can have fair elections where real progressives and people can be going up and running for office and be seen and we can have true options for our leadership."

Dawson has been a vocal supporter of Democratic presidential candidate Bernie Sanders and took part in a march for him this weekend.