Rooney Mara: I Wore A Redhead Merkin For 'Girl With The Dragon Tattoo' 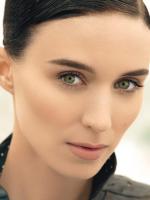 Asked why her character wasn't a redhead in 'The Girl With The Dragon Tattoo' like in the books and original film, Rooney Mara's answer took the conversation in a whole new direction.

"Well, she's a redhead but she dyes her hair black," Mara explained to Conan O'Brien on Wednesday night. "Yes, which was very important to me because I was a follower of the books."

"There's no way to really depict that in a movie except that, um, I had to wear a merkin. Do you know what a merkin is? It's a wig for your lady-bits."

"I mean, they didn't ask me to but I'm naked so much in it that I wanted one. Because it's like a little fur bikini."

"It was really cute. It was a cute little fur bikini and I had them make it strawberry blonde."

Asked if she gave it back after filming, Mara replied: "No, I have it."