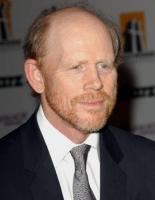 Director Ron Howard has released a video throwing his support behind Barack Obama, but this one isn't your typical rant.

Howard joins with Andy Griffith to recreate their roles as Opie and Andy in the 'Andy Griffith Show', and talk about the election as their old characters would, in black and white. Howard then dresses up as Richie Cunningham to meet up with Henry Winkler, who is back as 'The Fonz' from 'Happy Days'.