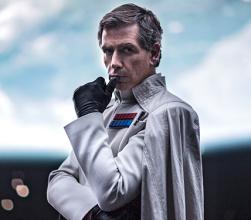 The wife of 'Rogue One' star Ben Mendelsohn has filed for divorce.

The pair married in June 2012. She is seeking physical custody of their 3-year-old daughter.

Mendelsohn, who has been in 'The Dark Knight Rises' and 'Bloodline', plays high ranking director Orson Krennic, the major antagonist in 'Rogue One', who is responsible for the completion of the Galactic Empire's superweapon, the Death Star.