'Rogue One's Alan Tudyk Appreciated Getting Cussed Out By C-3PO 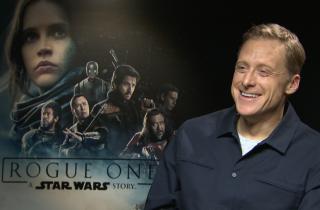 Alan Tudyk, who played 'Rogue One's K-2SO, says Anthony Daniels was jealous that Tudyk didn't have to put on an outfit to play the character.

Daniels, who famously had to put screws on his head to portray C-3PO, thinks Alan had it easy with K-2SO and had two words for him after the premiere.