Roger Ebert Blames Theaters For Down Year At 2011 Box Office 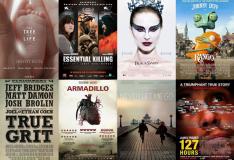 Film critic Roger Ebert believes there was more to the drop in 2011 box office numbers than simply the lack of 'Avatar' or another handful of blockbusters.

"Ticket prices are too high," Ebert explains on his website. "People have always made that complaint, but historically the movies have been cheap compared to concerts, major league sports and restaurants. Not so much any longer."

"No matter what your opinion is about 3D, the charm of paying a hefty surcharge has worn off for the hypothetical family of four."

"It's an open secret that the actual cost of soft drinks and popcorn is very low," he adds. "To justify their inflated prices, theaters serve portions that are grotesquely oversized, and no longer offer what used to be a 'small popcorn'. Today's bucket of popcorn would feed a thoroughbred."

According to AP, the domestic box office was down 3.4 percent from 2010, which took movie attendance down to a 16-year low.

Ebert believes another reason box office numbers are down is because many people simply can't find the movies they're interested in at theaters.

"Box-office tracking shows that the bright spot in 2011 was the performance of indie, foreign or documentary films. Yet most moviegoers outside large urban centers can't find those titles in their local gigantiplex."

"Instead, all the shopping center compounds seem to be showing the same few overhyped disappointments. Those films open with big ad campaigns, play a couple of weeks, and disappear."

"The message I get is that Americans love the movies as much as ever," he concludes. "It's the theaters that are losing their charm. Theaters thrive that police their audiences, show a variety of titles and emphasize value-added features. The rest of the industry can't depend forever on blockbusters to bail it out."