Robin Williams' Widow: There Was A War Going On In His Brain 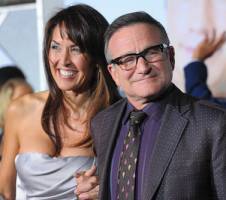 Robin Williams' widow says the actor-comedian had "chemical warfare in his brain" before his death.

Williams, who secretly suffered from dementia, committed suicide in August 2014.

In the medical journal 'Neurology', Susan Schneider Williams says her husband's suicide came "at the end of an intense, confusing, and relatively swift persecution" from the disease.

Williams had trouble remembering lines while filming 'Night of the Museum 3' and he couldn't bear it any longer.

"The loss of memory and inability to control his anxiety was devastating to him," she explains.

Williams was diagnosed with Lewy body disease after his death, a type of dementia that gradually worsens over time for which symptoms can include mood changes and seeing things that other people do not.