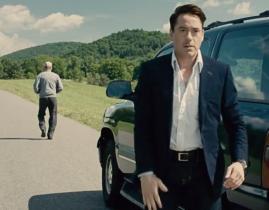 Robert Downey Jr. publicly congratulated his oldest son on Facebook for two achievements: his sobriety and his band's new music.

"Congrats are in order for my firstborn, and I'm proud to oblige," Downey Jr said of son Indio. "Having braved the crucible of addiction (and pleased the court), his ongoing commitment to recovery continues to inspire and amaze."

The 'Iron Man' star said while his 22-year-old son was "a musician at heart", his "dedication, consistency, and determination to grow" has helped him get past run-ins with the law in recent years.

"I've also made it my business to be of as little help as possible, as nepotism usually does more harm than good."

"Just for today, I'm gonna ease up on that. Trust me and give these fine young men a listen," as he provided a link to Indio's music.

"Unfortunately there's a genetic component to addiction and Indio has likely inherited it," the actor said at the time.