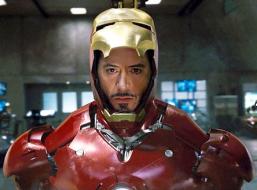 The 'Iron Man' star, who also helms Marvel's 'Avengers' franchise, earned an estimated $75 million between June 2013 and June 2014. It's expected Downey will see similar numbers for the upcoming 'Avengers: Age of Ultron' after tough negotiations.

Dwayne 'The Rock' Johnson comes in second with an estimated $52 million thanks in large part to the 'Fast and Furious' franchise. He also stars in 'Hercules', which hits theaters on Friday.

Bradley Cooper, who most recently voiced Rocket Raccoon in 'Guardians of the Galaxy', is third on the list at $46 million after 'American Hustle' and 'The Hangover Part III'.

Leonardo DiCaprio follows with $39 million for 'The Wolf of Wall Street' and 'The Great Gatsby' while another Marvel superhero, Chris Hemsworth, rounds out to the top five.

Interesting past and present Batman, Christian Bale and Ben Affleck, are tied at $35 million.

See the list of top ten highest earning actors below: